Join a free Q&A webinar and have your trading questions answered!

The Brazilian Real and IBOVESPA soared as local markets opened Monday after news of Bolsonaro’s favorable election polls the previous day. The right-wing Social Liberal Party leader claimed 46% of the vote and Worker’s Party head Fernando Haddad gained 29%. The second round will be held on October 28th. 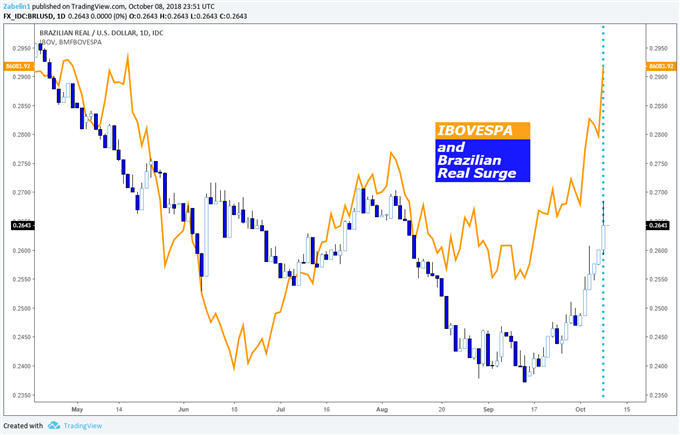 The market’s positive response to Bolsonaro is rooted in his economic agenda. His finance minister, University of Chicago-trained Paulo Guedes is a proponent of mass privatization and restructuring Brazil’s pension system. He is also an advocate of other market-friendly policies that encourage foreign direct investment.

This runs contrary to Haddad’s party which many economists blame for pushing Brazil’s economy into a recession and contributing to the country’s rising debt. His running mate, Manuela d’Avila is a member of Brazil’s Communist Party and is pushing for policy to protect Brazil’s natural resources from multinational firms.

The country’s polarizing election is likely to continue causing significant market volatility in the local currency and equity markets between now and the 28th.