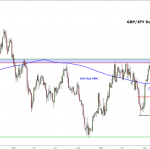 The handling of the whole Brexit process by the UK government has frankly been a total disaster, to put it nicely. Today saw several more ministers resign, this time over the Draft Withdrawal Agreement from the EU which was secured last night. With the pressure growing on Theresa May’s position as UK prime minister, sterling is getting an absolute hammering. The GBP/USD, down about 200 pips or 1.5%, has further moved away from the 1.30 handle, trading around 1.2790, while the more risk-sensitive GBP/JPY has fallen even more profoundly – down 250 pips or 1.7% at the time of writing.
Brexit Secretary Dominic Raab became the latest significant minister to quit because he “cannot in good conscience support” the UK’s draft Brexit agreement with the EU. Although Mrs May claims she has secured the backing of her cabinet for the agreement after a lengthy meeting last night, clearly not everyone was onboard. Indeed, several ministers have reportedly spoken against the withdrawal agreement and with Raab quitting, the Conservative backbenchers may decide to force a no-confidence vote in her.
Mr Raab was a Leave supporter. He was promoted to the cabinet to replace David Davis after he quit in protest at May’s Chequers plan. Brexiteers are clearly not happy over the deal that “leaves the UK in a halfway house with no time limit on when we will finally be a sovereign nation,” as Shailesh Vara put it nicely in his resignation letter when he quit as minister of state for Northern Ireland earlier today. Also resigning from their posts today are Work and Pensions Secretary Esther McVey, junior Brexit minister Suella Braverman, and parliamentary private secretary Anne-Marie Trevelyan.
With the pound unable to hold a sustainable bid, the GBP/JPY could fall further over the coming days. The 146.00-146.35 area is the key resistance zone that needs to hold now if the bears are to remain in control. The next major bearish objective is just below the previous major low at 142.77 and if that level breaks cleanly then the psychologically-important 140.00 handle could be the next objective.