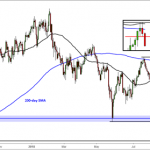 With US stocks struggling to hold onto their post-midterm elections gains, the risk-sensitive EUR/JPY currency pair has potentially resumed its long-term bearish trend after staging a counter-trend rally that lasted for several days until Wednesday. The euro has also been struggling due to ongoing concerns over Brexit and Italy, and soft Eurozone data. If risk aversion were to rise further next week then this pair could potentially drop sharply, so it is definitely one to watch.
Technically, the EUR/JPY has turned lower from around a long-term pivotal level at 130.00. It has also found overhead resistance from its 50- and 200-day moving averages, which also converge in close proximity to this psychological hurdle. The slope of the 200-day SMA is negative, objectively suggesting that the long term trend is indeed bearish. Thus, for as long as rates remain below here, the path of least resistance would be to the downside. With the short-term support around 129.40 now broken, this level is the first key resistance to watch going forward.
There are no obvious short-term supports to watch on the daily time frame, but 128.50 looks like an interesting level as price had previously found support and resistance around here. If this level fails to hold up price then the liquidity below the October low at 126.60/5 could be the next big bearish target to watch.
The alternative scenario would be if rates now push above the 200-day MA and resistance in the 130.00 area. Specifically, any rise above the old high at 130.15 would be a bullish development in our view because if that were to happen then we will have a higher high in place.