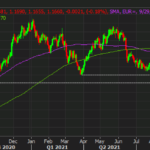 • EUR/USD starts the week on the back footing.
• Risk-on sentiment dented after mixed Chinese data.
• US Industrial Production figures next on tap in the docket.
The European currency remains under pressure and now drags EUR/USD to the 1.1570 region at the beginning of the week.

EUR/USD loses ground for the second session in a row on Monday on the back of the continuation of the recovery in the greenback.
In fact, higher US yields sustain the upside move in the buck and encourages the US Dollar Index (DXY) to retake the 94.00 yardstick and above at the beginning of the week. Same path follows yields of the German 10-year Bund, which add to Friday’s advance and reach the -0.12% region.
The pair looks offered against a weak backdrop in the risk complex after Chinese GDP figures showed the economy expanded 4.9% YoY in Q3 and 0.2% inter-quarter, both prints coming in short of estimates. In addition, the jobless rate ticked lower to 4.9%, Retail Sales expanded more than expected 4.4% in the year to September and Industrial Production expanded below forecast at an annualized 3.1% also in September. Nothing scheduled in the euro calendar on Monday should leave all the attention to the US docket, where Industrial Production figures and the NAHB Index will be in the centre of the debate.

What to look for around EUR

Despite EUR/USD managed to regain the key barrier at 1.1600 the figure and beyond during last week, it was unable to close any session at/above it. As usual in past weeks, dollar dynamics are expected to keep dictating the price action around spot for the time being, where tapering chatter remains well in centre stage. In the meantime, the idea that elevated inflation could last longer coupled with the loss of momentum in the economic recovery in the region, as per some weakness observed in key fundamentals, are seen pouring cold water over investors’ optimism as well as bullish attempts in the European currency.

Key events in the euro area this week: Final EMU CPI (Wednesday) – Preliminary PMIs in the euro zone (Friday).
Eminent issues on the back boiler: Asymmetric economic recovery post-pandemic in the region. Sustainability of the pick-up in inflation figures. Probable political effervescence around the EU Recovery Fund. Investors’ shift to European equities in the wake of the pandemic could lend extra oxygen to the euro. ECB tapering speculations.