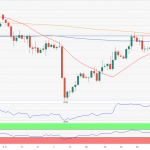 It was a tough week for the greenback, which remained out of the market’s favor after the mixed employment report released in the previous week, and weaker-than-expected US data released throughout the week. American CPI increased by 1.5% YoY in February, while the core reading printed 2.1%, below the previous estimate of 2.2%, slightly below the market’s expectations. Inflation at factory levels also increased by less-than-expected according to the PPI figures, while Durable Goods Orders were mixed, as the headline reading was better-than-expected, but the ex-transportation sub-component was a miss. Furthermore, New Home Sales decreased by 6.9% in January vs. an expected 0.6% decline.  Things in the EU were not much better, although there were not many relevant releases. German inflation was also softer-than-expected up by just 1.5% YoY. The shared currency gains were the result of Brexit optimism, as a skyrocketing Pound added pressure on the greenback. Nevertheless, speculative interest can’t find a reason to go long in the EUR, leaving the pair confined to the range established in the previous week. Slowing global economic growth, contradictory headlines related to the US-China trade war, and Brexit chaos, were behind the absence of a clear trend. Things are going to get much more interesting in the upcoming days, with the US Federal Reserve taking center stage. The central bank isn’t expected to make fundamental changes to its monetary policy, with attention shifting to the dot-plot and any revision to future rate moves. Market players believe that at least one rate hike is still in the docket for this year. More relevant the Fed will offer new forecasts on inflation and growth, following the December update. Back then, the central bank reduced chances of rate hikes from three to two, but ever since then, the dovish ‘patient’ stance has dented hopes of such happening. The event will take place at the same time the UK Parliament will vote another round of amendments related to an extension of Art. 50. High volatility is expected, and there’s a good chance that Brexit-related headlines would have as much influence on price action than the Fed itself this time.   In the EU, the most relevant macroeconomic data will be the German ZEW survey, expected to show that  Economic Sentiment deteriorated further in the Union, and preliminary March Consumer Confidence. By the end of the week, preliminary Markit PMI for both economies will be out. EU numbers posted a modest bounce in February, but not enough to spoke the ghost of slowing economic growth. As long as such fears persist, the EUR has no chances of posting solid gains. EUR/USD technical outlook The EUR/USD pair heads into the weekly close struggling with weekly highs just above the 1.3330 level, the 61.8% retracement of the latest daily decline. The pair has attempted several times to break above this region, although it failed to sustain gains above it. In the weekly chart, the price is now just below a directionless 200 SMA, while the 20 and 100 SMA remain above the larger one. Technical indicators in the mentioned chart offer a neutral stance, heading nowhere right below their midlines, with the risk still skewed to the downside in the longer run. Daily basis, the pair has spent the last three days seesawing around the 20 DMA, while the longer ones maintain strong downward slopes well above the current level, indicating that the latest advance falls short of suggesting a change in the longer-term bearish trend. Technical indicators in this last time frame continue hovering around their midlines, not enough to confirm a certain upcoming directional move. The 100 DMA hovers around 1.1370, providing an immediate resistance ahead of 1.1420. Beyond this last, the upward momentum could extend up to 1.1460 first and 1.1500 later in the week. 1.1300 has provided support these last couple of days, with a more relevant support at 1.1265. Chances of a downward move will increase on a break below this last. 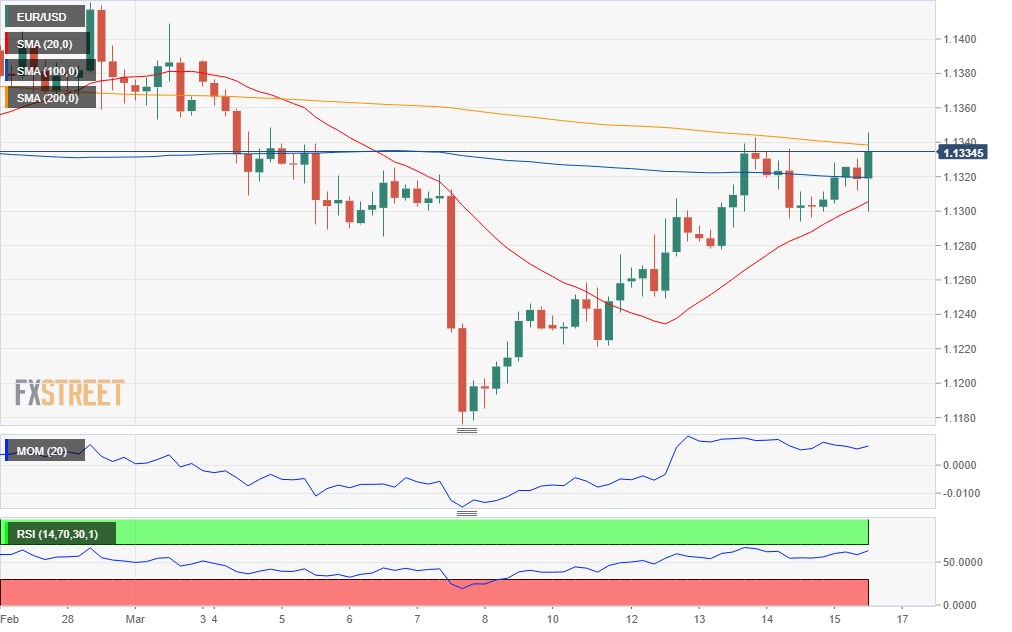 EUR/USD sentiment poll The FXStreet Forecast Poll shows little hopes that the Fed could revive USD demand, as the EUR/USD pair is seen bullish in the three timeframes under study, although the spread of possible targets is wide enough to keep the averages between 1.1300 and 1.1400. Bullish interest increases in time, accounting for 42% in the weekly perspective and reaching 59% in the three months view. The overview chart shows that the number of possible targets above the current level has increased sharply, with the moving averages heading north with uneven strength. Chances of an advance seem larger in the shorter term, with the pair tending to neutral as time goes by, rather reflecting the dominant political uncertainty.