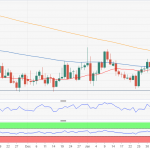 The EUR/USD pair broke lower and reached a fresh 2019 low of 1.1233 this Friday, down for a second consecutive week. The greenback was the strongest despite hesitating twice throughout the week. It suffered the first knee-jerk Tuesday, amid decreasing demand for safe-haven assets, due to the US Congress reaching an agreement about funding the government, which led to strong gains in equities markets. The upside remained capped for the common currency amid disappointing growth data, as German’s GDP remained path in Q4 according to preliminary estimates. The dollar turned back positive with the improved mood, hesitating  Thursday again on market talks of stalemated negotiations between the US and China. It finally resumed advancing Friday, as US-Sino trade headlines were a bit more encouraging, with a Chinese newspaper reporting some ends were met within this week talks, which will continue the next one. The EUR’s inability to run was not only due to poor German growth. EU Industrial Production plunged in December, while for the whole EU, the estimate of Q4 GDP printed a measly 0.3%.  Also, Italian League member, Claudio Borghi, said that the EU elections are the last chance to change Europe, otherwise Italy will have to leave, adding weigh on the common currency. US data was mixed, as the final figures of January inflation were better-than-expected, with the core CPI up 2.2% YoY, but December Retail Sales posting their largest fall in over a decade, down monthly basis by 1.8%. The common currency was also hit by comments from ECB’s Coeure, who said that targeted longer-term refinancing operations are “being discussed,” amid softer inflation and growth. Friday releases were also mixed, with Industrial Production falling 0.6% in January and Capacity Utilization shrinking to 78.2% from 78.8% previously. The most relevant preliminary Michigan Consumer Sentiment Index for February came in at  95.5, beating expectations and well above the previous 91.2. The upcoming week will bring the ZEW survey about economic sentiment in the EU and Germany, expected to have declined again. The US Federal Reserve will release the Minutes of its latest meeting Wednesday, while preliminary Markit PMI estimates for the Union and the US will be out Thursday. EU and German inflation will also be out next week. EUR/USD technical outlook The EUR/USD pair bounced from the mentioned low, heading into the weekend below the 1.1300 figure, bearish according to the weekly chart, as it’s the first time the whole weekly candle developed below the 200 SMA since November 2017. In the same chart, the 20 SMA maintains its downward momentum above the current level, while the Momentum lacks directional strength right below its mid-line and the RSI accelerates south around 40. The bearish case is stronger in the daily chart, as the price is below all of its moving averages which maintain strong downward slopes. The closest is the 20 DMA at 1.1365. The Momentum indicator heads lower in negative levels and at its lowest for this year, while the RSI lacks directional strength, consolidating around 40. Supports from the current level came at 1.1250 and 1.1215, the low set in November 2018, with a break below this last anticipating a steeper decline first toward 1.1160 and later toward the 1.1100 figure. The 1.1300 figure is offering an immediate resistance ahead of this week high of 1.1341. Beyond it, the recovery could extend up to 1.1400, where selling interest is expected to return. 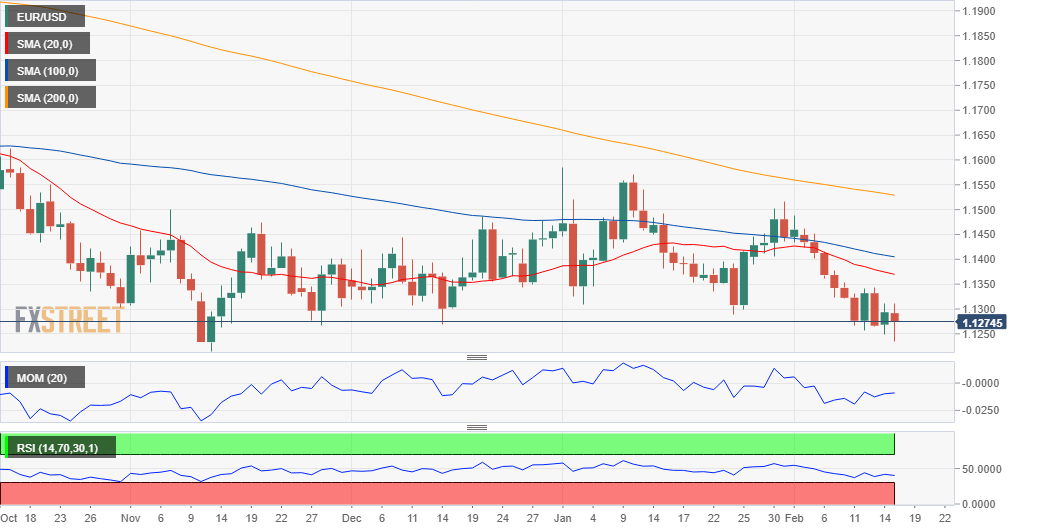 EUR/USD sentiment poll The FXStreet Forecast Poll shows that the latest developments put the market on the selling side, as over 70% of the polled experts seen the pair falling next week. The average target comes at 1.1246, down from 1.1348 in the previous one. Sentiment improves in the monthly and 3-month perspectives, with bulls taking the lead and being above 50% in both cases, with the average targets rounding the 1.1350 price zone. Seems more a result of considering 1.1000 a tough level to break rather than trust in a EUR’s recovery. The Overview chart shows that in the three time-frames under study, moving averages offer sharp downward slopes. In the weekly view, the largest accumulation of possible targets comes between 1.10 and 1.12, although as time goes by is being lifted to reach the 1.14/.16 region in the quarterly view. In this last time-frame, however, the range of possible targets goes from 1.0500 to 1.2100, with banks much more optimistic than traders.