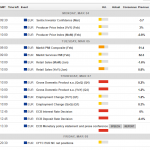 This was the week: Powell’s patience and Brexit hopes Fed Chair Jerome Powell testified on Capitol Hill and repeated the message of patience regarding raising interest rates. He described the economy as strong in 2018 and solid in 2019, a minor downgrade. Markets liked the tune and chances for a rate hike this year are very low, to say the least. US GDP beat expectations with 2.6% annualized in the fourth quarter of 2018. Markets were bracing themselves for a worse number, especially after December’s retail sales data badly disappointed. The good news had a lasting positive impact on the greenback.  On the other hand, Personal Income and Personal Spending dropped. More importantly, the forward-looking ISM Manufacturing PMI slipped back to 54.2 points, implying a slowdown in early 2019 and casting darker clouds over the economy. The US economy was good in 2018, but 2019 looks less than solid. Brexit delayed: UK PM Theresa May announced a procedure in which Parliament may instruct the government to ask for an extension of Article 50, postponing Brexit. This shift, alongside the willingness of the opposition Labour Party to accept a second referendum, sent Sterling skyrocketing and had a positive impact also on the euro.  It is important to remember that the euro-zone also has a lot to lose from a hard Brexit and that European leaders urged May to ask for a Brexit extension. Jens Weidmann, the President of the German central bank, acknowledged there is no need to overreact to the slowdown but recognized that the slump extends into 2019. He will continue presiding over the Bundesbank, thus officially out of the race for the presidency of the European Central Bank. Weidmann is considered hawkish. Euro-zone inflation accelerated to 1.5% on the headline, but the bigger news was a deceleration in Core CPI to 1%, complicating the task for the central bank. Euro-zone events: The Draghi show is back The forward-looking Sentix Investor Confidence for March kicks off the week and will likely remain in negative territory, reflecting pessimism. The Producer Price Index serves as another inflation gauge while the Services PMI data will probably show ongoing growth in the sector. Final GDP data is projected to confirm the initial read of the meager 0.2% QoQ growth rate. Everything serves as a warm-up to the all-important rate decision by the European Central Bank on Thursday. ECB Preview – Lower for longer? Back in January, the ECB left all its policy tools unchanged and continued pledging to keep rates low through the summer, leaving the door open for a rate hike in September. Since then, there are some signs of stabilization in early 2019, but the general picture is of a slowdown. President Mario Draghi said that “risks are moving to the downside.”  The big question is: will the ECB change its guidance already now? Some expect the Frankfurt-based institution to pledge low rates for an additional six months already now. The March meeting consists of new forecasts for inflation and growth, and downgrades are on the cards. However, as Draghi steps down in November, changing the guidance means tying his successor’s hands and complicating matters.  Another potential tool is a new TLTRO program to help banks lend money and keep the economies liquid. No decisions are projected now, but any comment on the topic will be closely scrutinized.  The initial reaction will likely come from the statement. If the Bank changes its pledge, the euro may drop. A repeat of the previous statement can boost the common currency. And then, the focus shifts as usual to the hour-long press conference by Draghi. Apart from the forecasts, his description of the economy is of high interest, especially about risks. Here are the critical events in the euro-zone, as they appear in the live calendar: 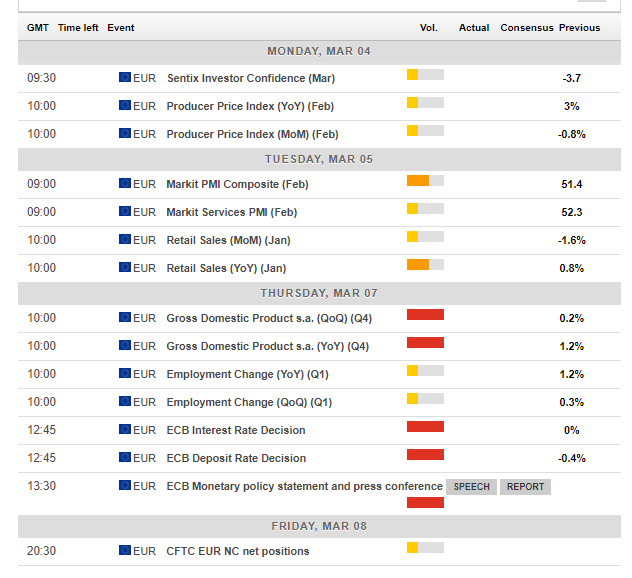 US events: NFP buildup The first significant event of the week serves as a hint to the last one. The ISM Non-Manufacturing PMI is a forward-looking gauge for the largest sector in the US and also provides guidance for the jobs report. The measure dropped to 56.7 points in January, reflecting the government shutdown as part of the slowdown. Markit’s final PMIs are also of interest.  The New Home Sales figure is due at the same time and will provide further insights into the issues of the housing sector. Sales of new homes went against the trend in November and rose to 657K annualized. The related data for December is due now.  Another hint towards the Non-Farm Payrolls is released on Wednesday. The ADP NFP came out at 213K in January, better than had been expected. The report for the private sector is not always 100% correlated to the private sector part of the official NFP, but this correlation has been quite significant in recent months. Thursday’s initial Initial Jobless Claims, Productivity, and Unit Labor Costs are of interest, but markets will likely await the primary event of the week. The NFP came out better than expected around the turn of the year, with a second blockbuster report in January. No less than 304K positions were gained while the Average Hourly Earnings rose by 3.2% YoY, a healthy rate. The rise in the Unemployment Rate to 4% is not of worry as it remains low in absolute terms and reflects an encouraging increase in the participation rate to 63.2%. More moderate figures are likely for February.  Here are the top US events as they appear on the forex calendar: 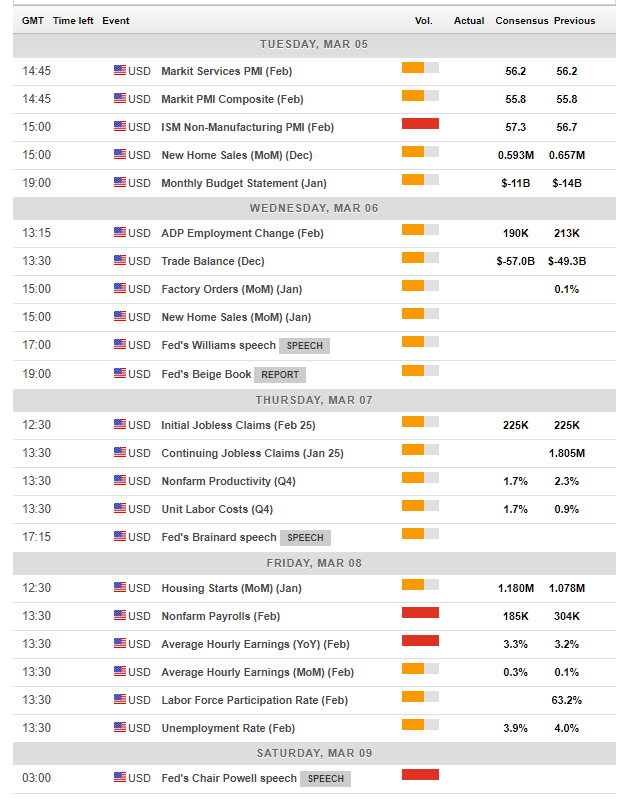 EUR/USD Technical Analysis EUR/USD moved up to a higher range, but the technical picture remains bearish. The pair trades below the 50-day Simple Moving Average after failing to settle above the line in the final days of February. Also, Momentum remains to the downside. The Relative Strength Index (RSI) is around 50, not going anywhere fast. Support is found at around 1.1355 which was a low point at the wake of March and also cushioned the pair in early January. 1.1330 was a stepping stone on the way up in late February, and 1.1315 had the same role beforehand. 1.1275 was a swing low in mid-February, and it is followed by 1.1250 which was an initial trough before the 2019 low point at 1.1235. The 2018 low is next at 1.1215. 1.1372 was a double-top in late February. Euro/dollar faces another minor resistance line at 1.1390 that had a role in both directions. 1.1405 capped the pair twice before it hit the February high of 1.1420. Further up, 1.1430 and 1.1450 marked the higher ranges seen in February. 1.1515 is the late January high coincides almost perfectly with the 200-day SMA. 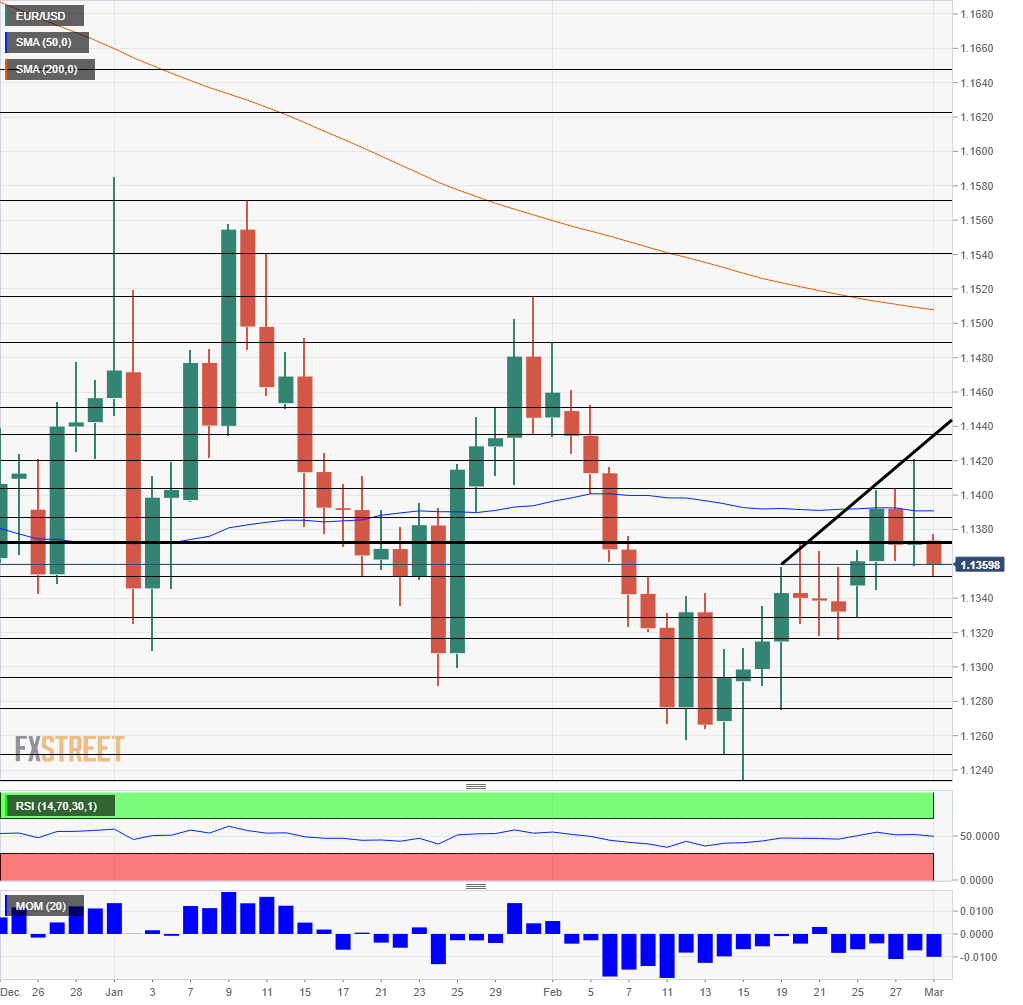 EUR/USD Sentiment The euro enjoyed a bit of US Dollar weakness, but now Draghi can remind us of the issues in the euro-zone. And even if the NFP misses expectations, a risk-off sentiment can push the greenback higher. The FXStreet forex poll of experts shows a neutral bias in the short term but a bullish one in the medium and long terms. The average forecasts have been slightly upgraded in the past week. 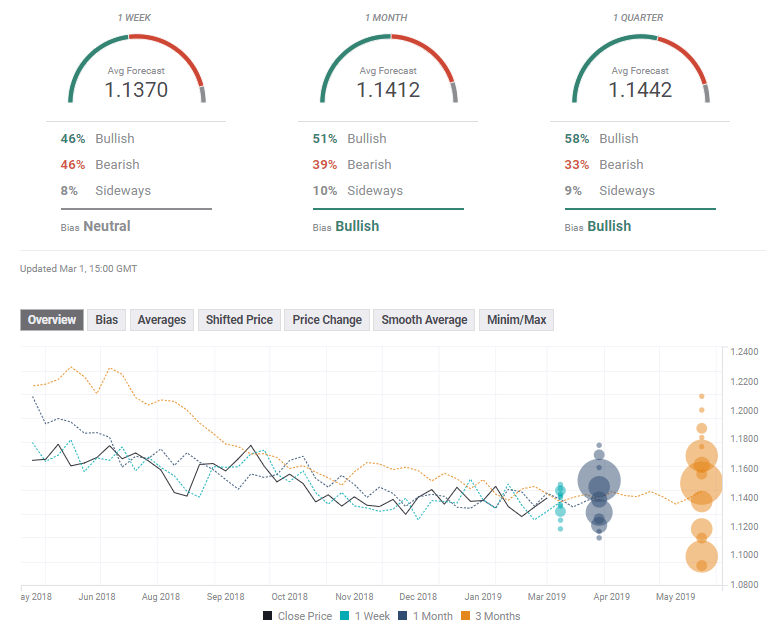