No matter what type of trading system you are trying to build, especially of a technical nature, you simply must be able to identify both support and resistance. I’ve yet to see a successful trading system that fails to at least acknowledge where buyers and sellers are jumping back into the market. After all, if you know where people are more than likely going to jump in and start buying, you know that the odds are in your favor if you do the same. Conversely, sellers coming in at a specific level also tells you when you should be looking to start shorting the market.

Obviously, nothing works 100% of the time. But by navigating where buyers and sellers are likely to jump in, then you can increase your odds of success. At the end of the day, the job of a trader is simply to make more than you lose. By playing the odds correctly, over the longer-term you should be able to accomplish this.

How would you find support and resistance?

If you don’t understand how to find support and resistance, there are a couple of simple ways to find it rather easily. The most obvious way is to simply pay attention to where buyers and sellers are stepping in on a longer timeframe. That brings up the first point: support and resistance means much more on longer time frames than it does on short time frames. This makes sense if you think about it, because it takes much more in the way of order flow to form support on a weekly timeframe than it does on a five minute timeframe.

Take a look at the attached chart, you can clearly see what support and resistance looks like. 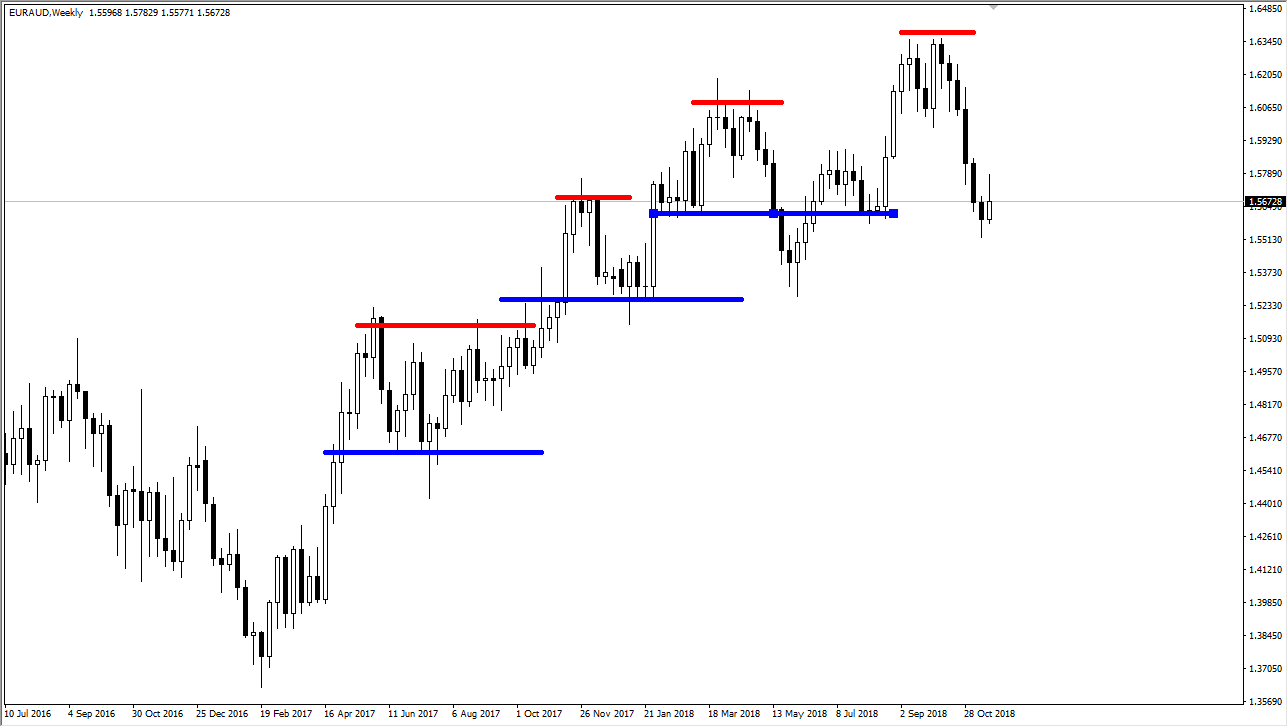 On this chart, I have red lines where the market is struggling to break above, and blue lines where markets are struggling to break below. This is support (blue), and resistance (red). Sometimes, it’s better to know where the market won’t go rather than where it will. I also would point out that quite often the support will be, resistance and vice versa.

You can see that over time, markets tend to react to these levels. By looking at the weekly chart, you can see various levels where markets struggle and therefore you can start to place trades based upon expectancy. Keep in mind again that this is the weekly chart, so there would have been plenty of trading opportunities on a shorter time frames that most of you would use.

So now that we have laid out these lines, we can begin to navigate the market. Think of it as signpost along the roadway. I think that the very basics of any successful system starts here.

Now that we have the concept, are there general rules?

As you start to spend a lot of time looking at charts, you will start to notice that there are certain patterns worth paying attention to. For example, it seems as if support and resistance tends to hover around major, round, psychologically significant figures. On the attached daily chart, you can see several levels highlighted where markets turned around. You also notice that the support and resistance lines are 250 pips apart, at large figure such as 1.60, 1.6250, 1.550, etc. In other words, there are major areas where large amounts of money flow into the marketplace. This is because large funds put in huge orders at generalized areas. For example, you may run a fund who has a client looking to buy the Euro at 1.5750 AUD. On this chart, you can see there were several different times were you could have been a buyer right around that price. They don’t jump into the market all at once, because they can move the market against themselves in these massive orders. So what typically will happen is that the funds will continue to buy at that level every time it can until it fills its order.

The point here is that large round numbers tend to attract a lot of attention. 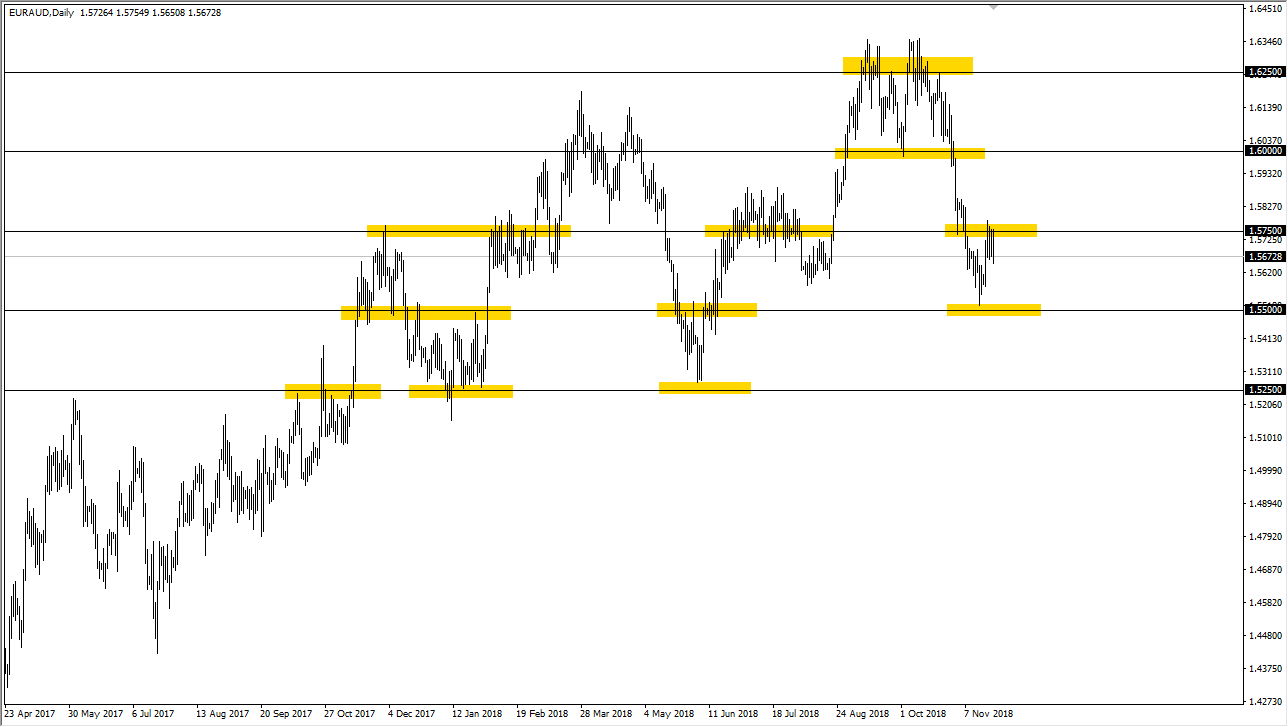 Are there any other hints?

For example, towards the end of the chart there is a shooting star at 1.5750. Notice the long wick on the candlestick, right at resistance. What does this tell you? It tells you that the buyers are struggling to break above what we already know should be a resistance barrier based upon previous support. That brings to light one crucial hint: support often becomes resistance and vice versa later on. Or better put, “what was once the floor becomes the ceiling.” You can see this time and time again on the chart, as it is a natural phenomenon in the market.

Now that you know that the buyers can overcome the resistance, it makes sense that we could start selling. This doesn’t mean that we know we will make money, we just know that the odds are we will. That’s really all you can do. Also, notice at the 1.55 level shortly before there, I have an arrow pointing at a hammer. That hammer is a sign of support, because the sellers can’t break down below the massive support at the 1.55 handle. That’s an area that is a round number, an area that has proven itself on the longer-term charts, and now is showing signs of strength. It’s a buy signal, plain and simple. 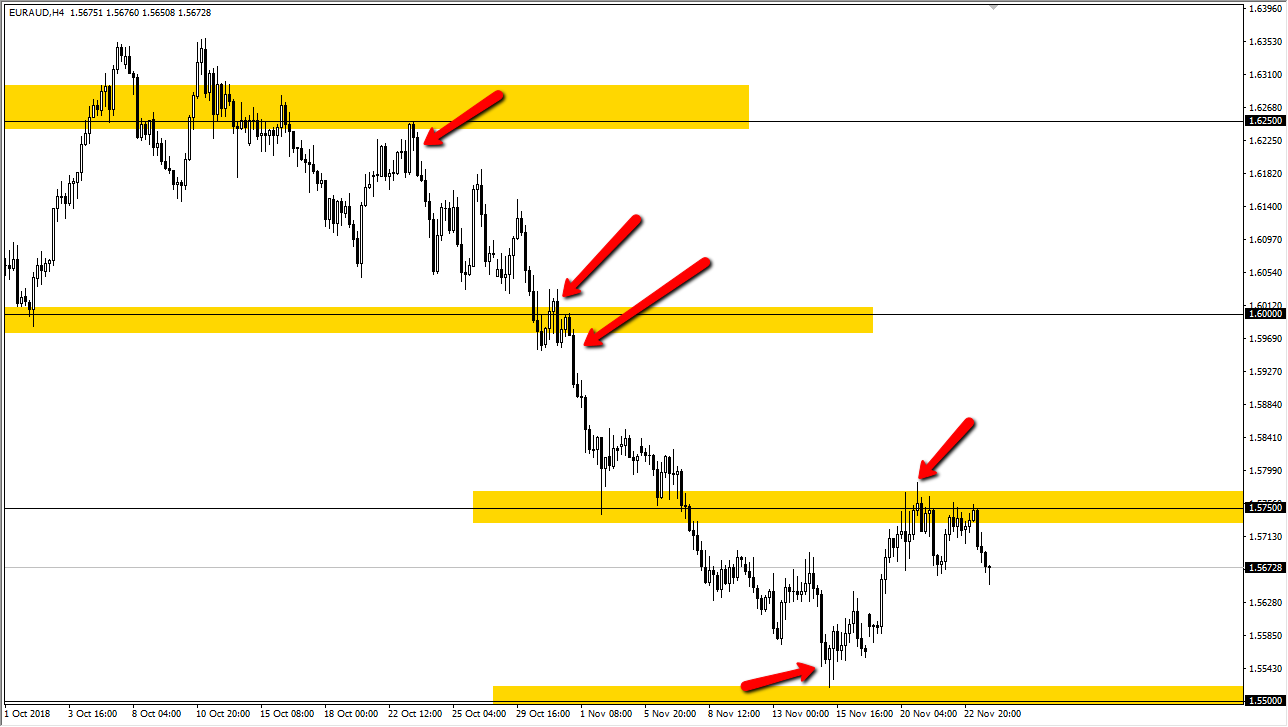 The main take away

The main take away of course is that nothing is perfect, but by understanding candlestick patterns and more importantly where they are placed on the chart, you can greatly increase your success rate when trading. Long wicks that failed to break through support or resistance are a great sign, just as massive negative candles at resistance can be. Listen to what the market is trying to tell you, it’s really that simple.