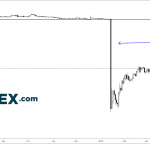 As soon as China was removed from the list of currency manipulators earlier this week, Switzerland was added.  Strength in EUR/CHF has always been a big problem for the SNB.  Recall exactly 5 years ago today,  January 15th, 2015, when the Swiss National Bank (SNB) removed the Swiss Franc peg to the Euro and allowed the Franc to float.  EUR/CHF fell from the floor of 1.2000 down to a low near .9650 in a heartbeat, taking out longs who believed the SNB would commit to the 1.2000 floor.  Traders, and a few brokers, were wiped out of business on that day as they didn’t have the funds to pay their margin calls.  Liquidity was extremely scarce, and even if you did have a stop in place, most weren’t filled until well below their stop levels. 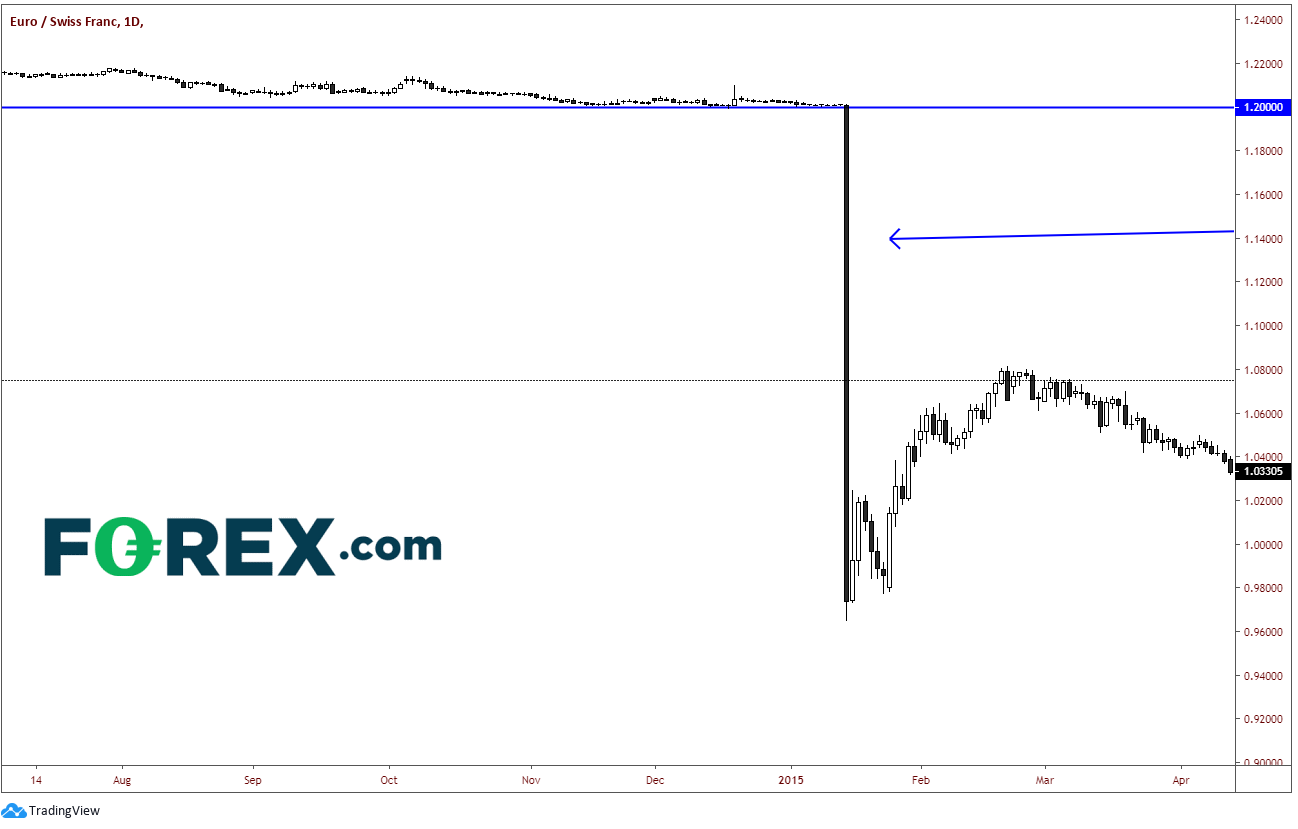 Source: Tradingview, FOREX.com
The SNB still admittedly intervenes in the market to help lower the value of the Swiss Franc, so being labeled a currency manipulator should not be much of a surprise.  However, as of the beginning of December, it doesn’t appear as though they have been involved too much in USD/CHF.  From early October 2019 until early December 2019, USD/CHF was stuck in a range between .9850 and 1.0025.  Twice the pair tried to clear the 1.000 level, only to close back below it.  This set up a double top on a daily timeframe.  On December 10th,  USD/CHF finally broke below the neckline of the double top, setting up a target equal to the width of the double top added to the breakdown point, which is .9635.  Today, price is closing right near that level, reaching the double top target. USD/CHF closed today at its lowest level since August 13th, 2019.  Price is also diverging with the RSI, indicating a possible near-term reversal. 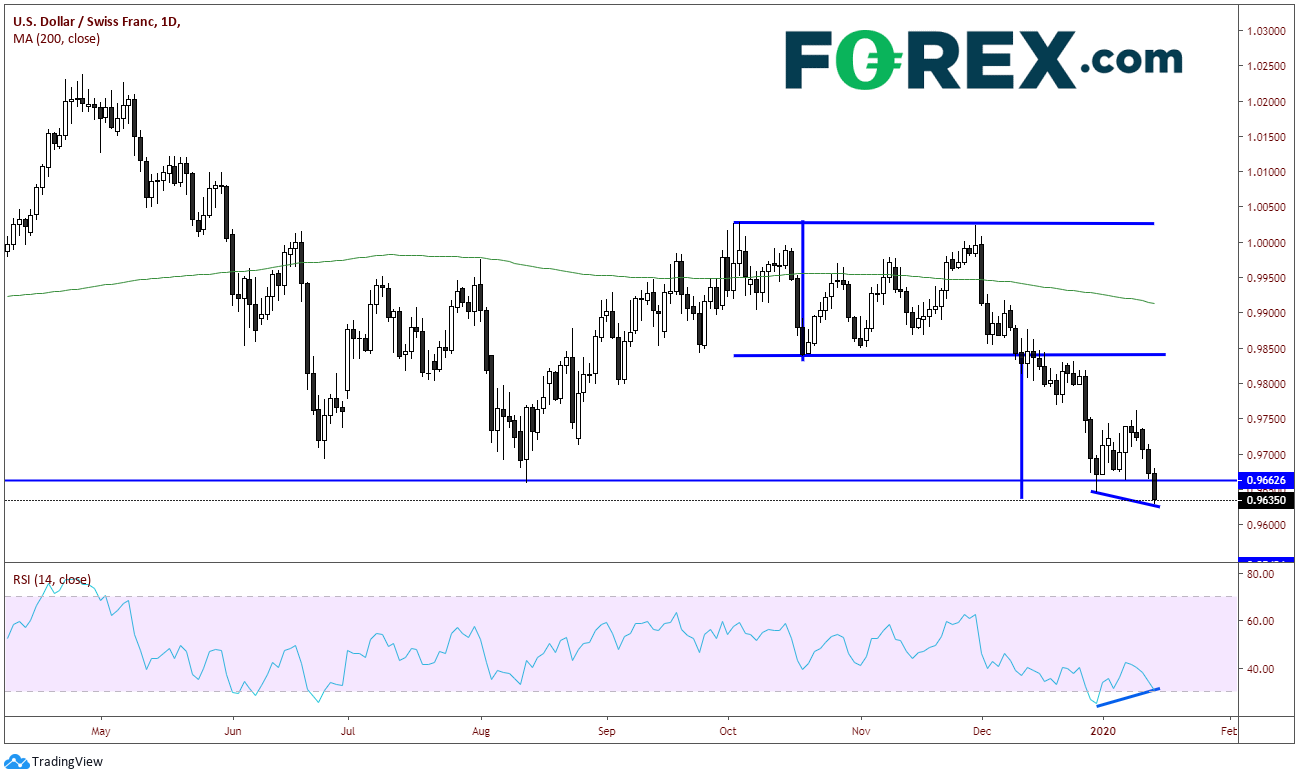 Source: Tradingview, FOREX.com
If price does continue to move lower, first support is near .9590, which is the 61.8% Fibonacci Retracement level from the lows of February 16th, 2018 to the highs of April 26th, 2019.  Next support is previous lows, which come across near .9543 and then some minor horizontal support all the way down near .9400. 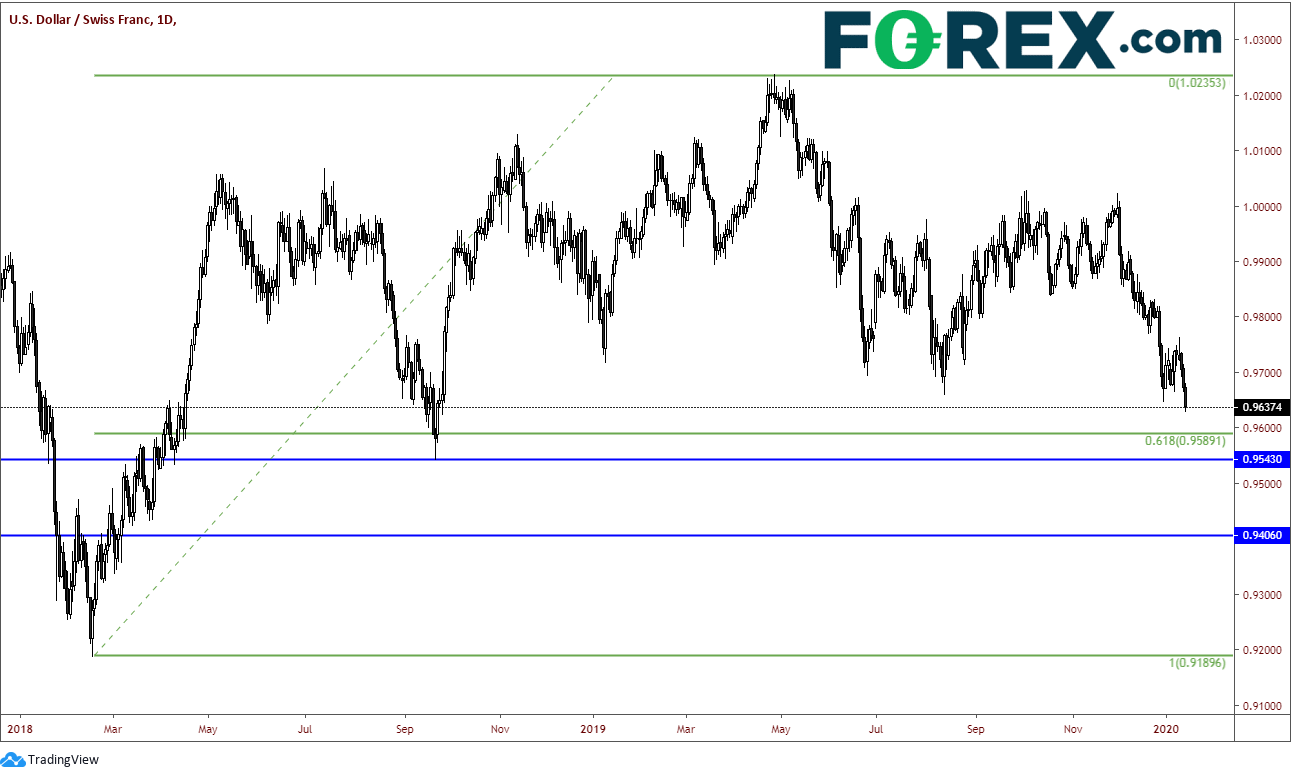 Source: Tradingview, FOREX.com
On a 240-minute timeframe, note that the RSI has moved into oversold territory and is diverging from price as well.  Resistance above comes across near .9715, which is the intersection of horizonal resistance and a downward sloping trendline going back to early December 2019.  Above that, there is horizontal resistance near .9770 and then resistance at the breakdown level from the double top near .9850. 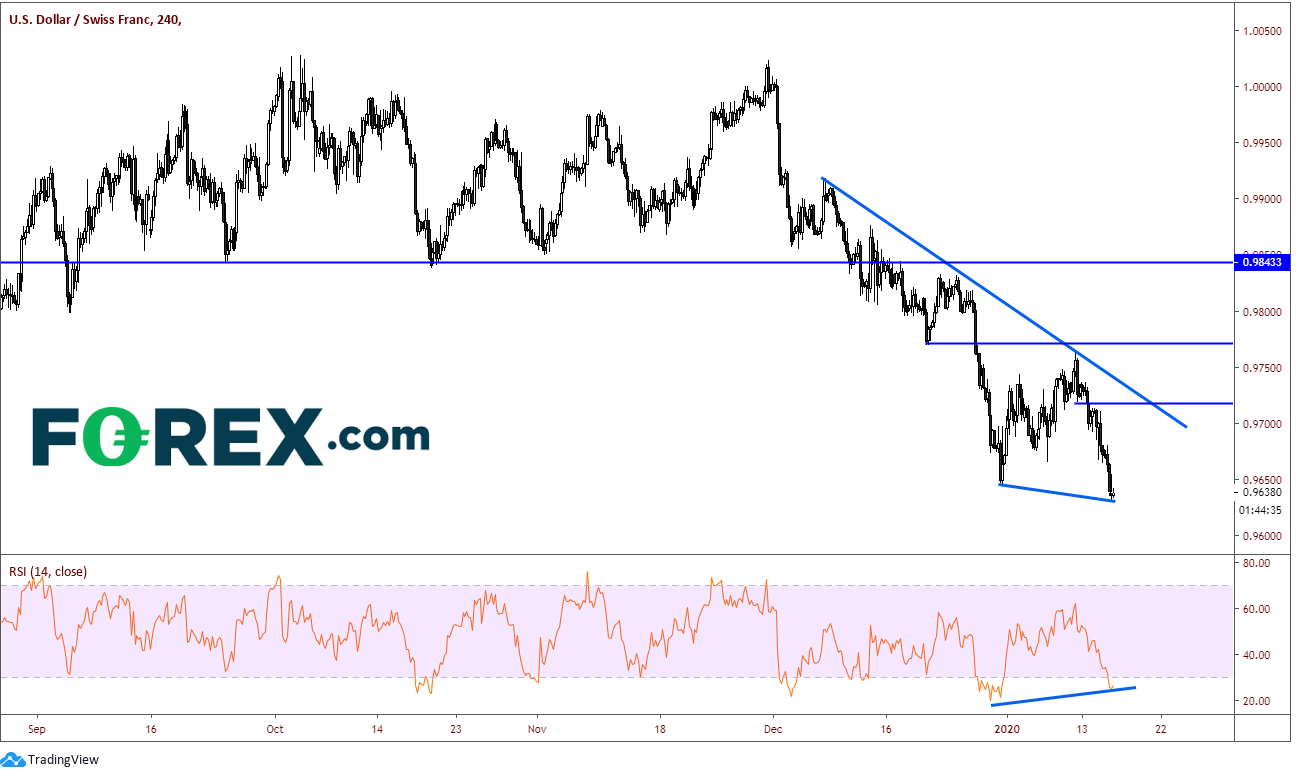 Source: Tradingview, FOREX.com
Over the last 2 days, both EUR/CHF and USD/CHF have made new long-term lows.  One of the reasons for this could be that the SNB has intervened less.  However, one should never forget the lesson the markets learned 5 years ago today….that they could be much lower and much more quickly!