Fourth-quarter technical and fundamental forecasts from the DailyFX analysts are out now.

The International Monetary Fund cut its global growth forecast on Tuesday, citing escalating trade conflicts and tighter financial conditions. A gloomier reassessment of Emerging Markets’ chances were behind the lion’s share of its action.

The Fund’s World Economic Outlook update pegged global growth at 3.7% for 2018 and 2019, down from 3.9% previously thanks to trade-war worries and rising economic tensions in the EM space. Growth is still relatively strong, the IMF said, but has plateaued at 3.7%. ‘as risks have start to materialize.’

The balance of those risks has shifted to the downside, it went on.

The Fund now thinks growth across EM economies will remain flat at 4.7% this year and next, whereas its previous forecast looked for gains of 4.9% this year and 5.1% in 2019.Developed economies fare better, but not much. The IMF left this year’s forecast alone at 2.4%, and downgraded its 2019 call by just 0.1 percentage points to 2.1%.

Forecasts for China, the US and Eurozone were all revised modestly lower and the IMF said that its modelling suggested that the imposition of all currently threatened US tariffs would cut global GDP growth by 0.8% in 2020.

Asia Pacific foreign exchange markets appeared to take this downbeat report very much in stride, with little movement seen after its release. The US Dollar had been meandering lower against the Japanese Yen through the Asian morning and this process continued after the IMF report crossed the wires. 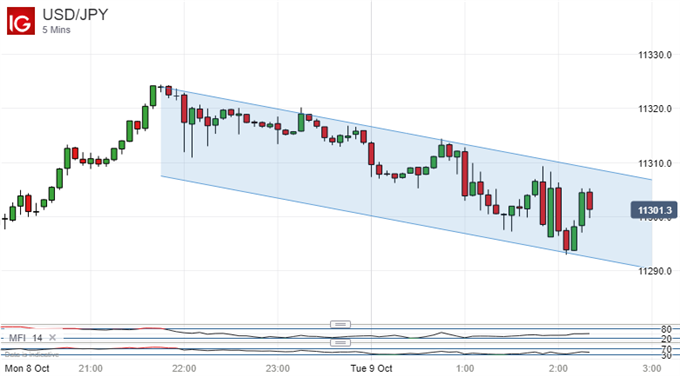 Whether you’re new to trading or an old hand DailyFX has plenty of resources to help you. There’s our trading sentiment indicator which shows you live how IG clients are positioned right now. We also hold educational and analytical webinars and offer trading guides, with one specifically aimed at those new to foreign exchange markets. There’s also a Bitcoin guide. Be sure to make the most of them all. They were written by our seasoned trading experts and they’re all free.