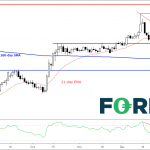 The pound fell sharply this morning after the Bank of England’s Mark Carney delivered a dovish speech, before recovering to trade slightly lower against the euro and dollar and flat against the yen.
The outgoing BOE Governor said persistent weakness could require prompt response and that there is headroom equivalent of 250 bps of policy space. While this is clearly a dovish message, investors realise that the BoE’s policy response will be more sensitive to Brexit developments than economic data over the next several months.
With the UK set to officially leave the EU at the end of this month, we could see some improvement in domestic data in the months ahead because households and businesses – who have repeatedly delayed their purchases and investments in the past – may finally start to spend more and boost growth now that there is some certainty. The potential for pent up demand means the economy should grow a little more robustly, which in turn could support sterling’s recovery.
But the key risk is that the UK may not be able to negotiate a good trade deal in just 11 months
UK Prime Minister Boris Johnson and the newly-appointed EU Commission President Ursula von der Leyen met yesterday and set out some red lines for the negotiations set to take place this year. Leyen warned that getting a full and comprehensive exit deal by the end of 2020 is “impossible,” and an extension is therefore required – something Johnson has previously ruled out. She also added that as an outsider, the relationship between the UK and EU will never be the same as before.
However, I think when push comes to shove Boris Johnson will bow to pressure and extend the transition period if required. Thus, the government is in a good position to negotiate a favourable trade deal for the UK. As such, the downside should be limited for sterling – making us bullish on the currency in long term.
GBP/JPY breakout on the cards?
In the short-term, there will be lots of noise and sterling will come under pressure from time to time – as has been the case over the past few weeks. But against the yen at least, the pound could be about to resume its bullish trend.

Source: Trading View and FOREX.com.
As per the chart, the GBP/JPY has held its own above the key 141.40 support level for two months now. The recent consolidation has allowed momentum indicators such as the Relative Strength Index (RSI) to work off their overbought conditions through time rather than price, which is bullish. On Wednesday, the GBP/JPY formed a hammer candle on the daily as the bulls once again defended that 141.40 support. With this apparent bullish price structure in place, a closing break above Wednesday’s high of 143.10 should be a bullish development. If so, we could see rates go for a re-test of recent highs around 147.95. However, a closing break below 141.40 would put an end to any short-term bullish price structure. If this happens, we could see rates fall sharply.