See our study on the history of trade wars to learn how it might influence financial markets!

The anti-risk Japanese Yen gained broadly against its major counterparts to start the beginning of this week as expected, boosted amidst further declines in global benchmark stock indexes. Losses picked up pace as European markets came online and Italian 10-year government bond yields soared to their highest since 2014.

Concerns seemed to have stemmed from Italy as EU Commissioners noted a ‘significant deviation’ of budget targets, referencing the 2.4% deficit proposed by the anti-establishment parties. The DAX and Euro Stoxx 50 finished the day 1.36% and 1.07% lower. This also boded ill for the Euro which underperformed after a couple of days of correction.

While Wall Street edged cautiously lower, the S&P 500 fell only about 0.04%, there was a recovery in stocks towards the latter half of the day. This allowed pro-risk currencies such as the Australian and New Zealand Dollars to end the session on an upbeat. Banks and consumer staples helped to compensate for declines in tech shares.

Rising trade war tensions between China and the US over the past 24 hours could add further weight against APAC stocks on Tuesday. Secretary of State Michael Pompeo noted ‘fundamental disagreement’ during his meeting with China’s foreign minister. We are already seeing Nikkei 225 futures edge cautiously lower with the Japanese Yen gaining.

Speaking of, USD/JPY has breached a near-term rising support line. This has opened the door to a more lasting reversal which may see prices test the rising trend line from March 2016 next.

What Else to Expect Ahead? 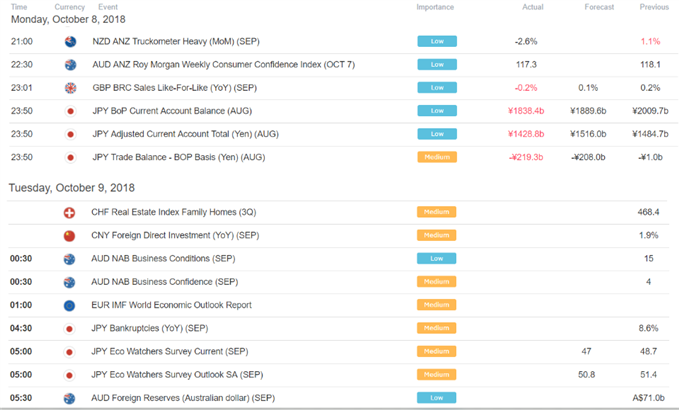