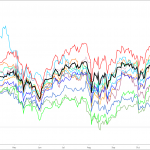 With this being the last trading day before Christmas, it is perhaps the perfect time to remind ourselves of 2019’s biggest winners and losers to date. The information could be useful to trend-following market participants and the mean reversionists who look for fading opportunities in over-extended price moves. To keep things simple, I have only included the major markets and excluded individual stocks and exotic currencies. So, without further ado…
Stocks: At the top of the tree is the Nasdaq 100 and at the bottom is Spain’s Ibex and UK’s FTSE 100 among major global indices. Stocks have rallied across the board in 2019, even if there were turbulences along the way as investors worried over Brexit and the damaging trade war between the US and China, among other things. But as optimism grew that the world’s largest economies were agreeing to a phase one trade deal, stocks pushed higher – especially in the US. Tepid economic growth in Europe kept the gains in check for indices in this continent. But this lack of economic growth and non-existent inflationary pressures meant investors were confident that the major central banks were not going to exit zero or negative interest rate policy, and QE, any time soon. They therefore saw the higher-yielding equities as one of the most attractive assets again, causing global stock markets to rise sharply. But as the central bank balance sheet grows ever larger, the withdrawal of such liquidity is a major concern that could come back to haunt stocks at some point down the line.

Commodities: Gold (XAU) and WTI made it to the top as economic growth concerns saw copper lag among major commodities. For the fourth consecutive year, gold and the S&P 500 went in the same direction – both moving higher in 2019, as they did so in 2016 and 2017, and fell in 2018. This is all thanks to major central banks depressing yields with their extra-ordinary loose monetary policy stances. Lower yields help to raise the appeal of noninterest-bearing assets such as gold and silver.  And while the agreement (but yet-to-be-signed) of phase one trade deal between the US and China was good news for risk assets, it was not necessarily bad news for safe-haven gold. If anything, it was actually good news. Rising optimism over a trade deal helped the yuan strengthen slightly, making gold relatively less expensive in yuan terms. With China being one of if not the largest gold consumer, this implies increased demand – especially ahead of the Lunar New Year when gift jewellery purchases tend to rise. Meanwhile crude oil rose as concerns over the global economy faded towards the end of 2019. On top of this, the OPEC+ continued to intervene by restricting supply of the stuff. But there were some concerns that the OPEC+ group will not be able to support oil prices for too long given the rising non-OPEC supply and tepid demand growth.

FX: The Canadian dollar and the pound were at the top, while at the bottom it was the euro, among the majors. The Loonie benefitted above all by a rising price of crude oil and also the Bank of Canada. The latter was the last major central bank to drop its hawkish bias and for a while it looked like they were going to do a complete Fed-style U-turn on interest rates. However, the BOC was not as dovish as the markets had expected and the CAD recovered to go back to top of the FX leader board, after being leap-frogged for a while by the pound (see below). However, key economic data releases from Canada disappointed expectations in recent months and heading into the New Year, the Loonie could fall back should the trend of weaker-than-expected data continue. There are also concerns the OPEC+ will not be able to support crude oil prices given the rising non-OPEC supply and tepid demand growth. If crude oil falls back, the Canadian dollar could follow suit. Meanwhile, there were no real reasons for the euro to go higher as the European Central Bank restarted QE and provided a very dovish forward guidance. But will the new ECB President Christine Lagarde help create growth and inflation in the Eurozone – something which failed predecessor Mario Draghi?

GBP crosses: GBP/JPY made it to the top, but GBP/CAD remained the only major pound cross in the negative. The pound recovered sharply after a poor start to the year after years of Brexit-related uncertainty. Investors slowly realised that an election could end the stalemate. They started to price in the prospects of a Conservatives majority before the election and they were proven more than correct by the electorate as the Conservatives stormed to victory. The outcome of the UK election meant that the Brexit withdrawal bill would finally pass through a Conservative-majority parliament, paving the way for a January 31st official exit and the start of an 11-month transition period. However, jubilations were short-lived as the prospects of a no-deal exit came back to the forefront after the Prime Minister Boris Johnson refused to extend the Brexit extension period beyond the end of 2020. That raised concerns that the UK could sill crash out of the EU without a deal and so the pound gave back more than 500 pips against the dollar following the election – causing the currency to fall back from the top of the leader board. Heading into the new year, Brexit-related uncertainties will remain a key focus for UK investors – but at least there is finally some light at the end of the tunnel, even if the tunnel is still miles and miles long.

EUR crosses: The single currency fell against all her major rivals in 2019. The EUR/AUD may have been the best performer, it was still negative year-to-date and one day before Christmas. The Aussie struggled relative to other major commodity dollars. It was held back by rate cuts from the Reserve Bank of Australia (RBA) and concerns over weak economic growth hurting demand for commodities. In contrasts, the EUR/CAD was at the bottom as the Canadian dollar shone brightly (see above).

JPY crosses: For the reasons given above, there should be no surprises to see the CAD/JPY at the top of the leader board for yen crosses, and EUR/JPY at the bottom. The yen itself sold off as investors continued to pile into stocks, reducing the demand for the haven currency. On top of this, speculation grew that the Bank of Japan may unleash more monetary stimulus in 2020. If they do, the yen could come under further pressure next year.

Source for all charts from Trading View and FOREX.com.